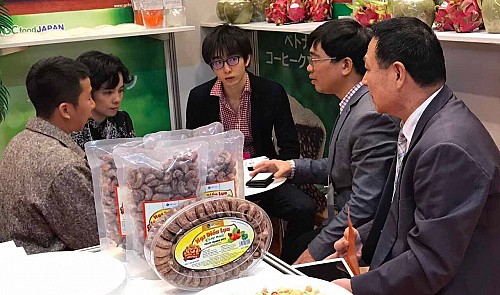 The factory features Japanese-imported machinery and technology worth US$6 million and can process up to 50,000 chickens per day, according to CEO Khuu Nhon Hieu.

“We have been investing in the production of export-quality chicken to satisfy Japanese standards for the past two years,” Hieu said.

“This is one of the final steps, and we await one final inspection from Japanese importers before our first shipment to Japan can take sail.”

Nguyen Van Thu, director of GC Food, said his company had also been busy preparing for the shipment of red-fleshed dragon fruits to Japanese partners.

Having just returned from Foodex Japan 2017 held in Chiba Prefecture, Thu said that Vietnamese produce had great potential for export to Japan.

Aside from red-fleshed dragon fruits, which have only been allowed into the East Asian country since earlier this month, Japanese consumers also have a high demand for other Vietnamese exports including frozen goods, cashew nuts and coffee, Thu said.

According to a leader of Binh Duong-based fruit exporter Yasaka, Vietnam’s dragon fruits and mangoes enjoy many advantages over products of neighboring countries in terms of their competitiveness.

“We are planning on switching to a hot vapor treatment method for fruits to improve our capacity in the future,” he said.

To enter the Japanese market, Vietnamese chicken exporters must meet strict quality and food safety standards, which include the use of chicken breeds imported from France or the U.S., an absence of antibiotic residues, and a clean record of poultry-borne diseases, according to Nguyen Minh Kha, owner of one chicken farm partnering with Koyu & Unitek.

“The successful export of chicken to Japan is one way for Vietnam’s chicken industry to prosper amidst fierce competition from imported chicken,” Kha said.

Japan imports hundreds of millions of dollars worth of products every year, making it a huge potential market for Vietnamese agricultural exporters, said Nguyen Trung Dung, ministry counselor for Vietnam’s Ambassador to Japan.

Meanwhile, Japanese importers are also looking for new business partners in Southeast Asian countries as they tend to shy further and further away from China, Thu said, creating a great opportunity for Vietnamese businesses to establish their presencein a lucrative market.

However, as Thu pointed out, Vietnamese producers are falling behind in the race due to their inability to meet high standards of food safety and origin traceability.

Japanese businesses demand Vietnamese partners play by their rules by requiring facilities based in Vietnam abide strictly to Japanese standards in the investment of equipment and the establishment of appropriate working conditions.

“One of the hardest requirements to meet is the competence of Vietnamese workers, as they are infamous for a lack of discipline in the workplace, while the domestic training programs of some local businesses have been found wanting,” Thu said.